Facebook started something unfortunate. They’ve started doing this “Back on this day” campaign, which means they’ll pull up statuses, pictures, and conversations you had  on your timeline on from exactly 1+ years ago, as long as it’s the same month and day. It’s been going on for awhile now, but I just realized how inconvenient it is. Namely because I was a *slightly* dramatic teenager who should have had a Facebook account until I was 18 years old.

Exhibit A, to prove my point. 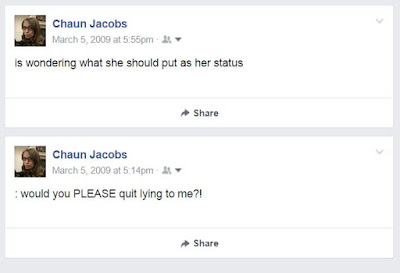 And, although it enhanced my status “technique”, I didn’t purposefully write in third person for the effect. That was a Facebook requirement way back in the day.

But. The evidence clearly speaks otherwise.

Hi! My name is Chaun. I write stories. Sometimes they're ridiculous things. But they're stuff that makes you happy. :)

Video of the Week

A college student gets caught in a drag race across campus. After years of never filming together, we’ve decided to come back to an old…